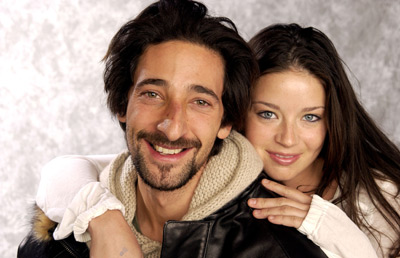 Why does this publicity photo make this movie seem like it’s a romantic comedy, or something? 😉

Jack Grace (Adrien Brody) is a con artist who is secretly more sensitive and intelligent than he lets on. He collects rare books, goes to an art house movie theater, and is writing a novel in the office he’s set up inside a rented storage unit. I believe his partner in crime, Charlie (Jon Seda) knows Jack’s toughness is mostly a front, because he knows his life. However, Charlie doesn’t blow Jack’s cover, so to speak, he lets him have his mystique.

Jack meets and is immediately drawn to Claire Harrison (Charlotte Ayanna), a chemistry major and “good girl” archetype who works at the aforementioned movie theater. She is probably about 20 years old. He charms her, even though she puts up a disinterested front at first. She is attracted to Jack and it’s easy to understand why.

There is something charismatic and alluring about Jack. As an added bonus, he looks like Adrien Brody. Claire is also strikingly beautiful, with black hair, blue eyes and gentle features — and is basically a genius to boot.

I probably don’t need to tell you the two quickly begin a physical relationship, which for Jack is mainly conquest, whereas Claire becomes attached. Yup, that old cliche.

Or, so it would seem. You see, Jack has fallen hard for Claire, too, but he knows their lifestyles are incompatible and he pushes her away. He can’t let down his tough guy exterior and admit he loves a brainy and sheltered young woman.

Despite Jack avoiding Claire at every turn, and treating her as rudely as possible, she keeps coming back. He can’t shake her. We get the feeling he doesn’t really want to, at least on some level.

Jack has a light inside to him that he hides away, Claire has darkness in her that she forces to the surface. She ends up perhaps surpassing Jack in that regard and takes things to extremes.

Jack softens (at least privately), Claire hardens (publicly). They’re no good for each other, yet while watching this story play out, you can’t help rooting for them to have some sort of Grease-esque moment where their worlds meet.

At the close of the film, we get the idea that things may be moving in the direction of finding middle ground, forgiveness, and peace, but it ends somewhat ambiguously. We’re left to draw our own conclusions as to the fate of Jack and Claire’s relationship. It’s actually kind of a Woody Allen style ending in that way (even though nothing else in this movie is anything like his style — other than Brody slipping into a similar voice during a lighthearted scene).

This is going to sound petty, but the main thing that keeps me from rating this film higher is the soundtrack. Some of it is very fitting (like the hip hop tracks, or the club music), but much of the music is overpowering. It’s almost jarringly loud and detracts from the feeling of a scene, rather than enhancing it. Music should help a movie convey its message, not hinder it. It’s not that they are bad songs, necessarily (though, at least one gets on my nerves), it’s more so the volume and sometimes awkward placement.

There are also a few less-than-stellar moments in the story and execution, but not many.

Can I just say Adrien? Do I have to elaborate? I do? Okay…

Jack Grace is one of the best roles I’ve seen Adrien play (and I’ve seen everything released so far). He’s a complex and layered character who gives Adrien a big range of emotions and situations to play with. It’s great to witness that. Watching Brody in this film is like taking an acting class.

The chemistry between Seda and Brody is fantastic. They really come across as lifelong friends, with inside jokes and knowing smiles. And we get a sense that only they truly know what each other has been through.

The chemistry between Brody and Ayanna is also good, but definitely not as strong as the Brody/Seda connection.

Generally, I would recommend Love the Hard Way. Brody’s performance is so nuanced and captivating that it really should be seen and appreciated by anyone who enjoys his work. The film is without a doubt a drama, with many dark elements, but there are some lighthearted and humorous moments that keep it fun, as well.