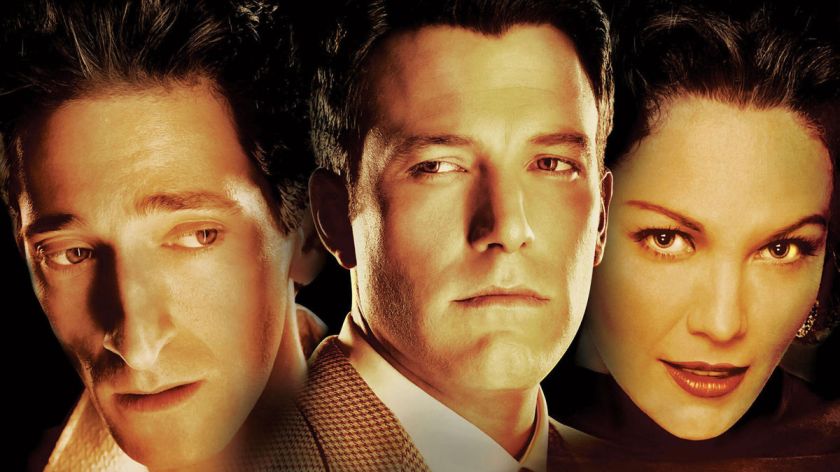 George Reeves, the man who played Superman on the original television series, passed away via suicide in June of 1959. Some people believed his death was suspicious. At the very least, the circumstances surrounding Reeves’ life and death were somewhat complicated. This film explores many scenarios for what could have happened that night, and it’s very interesting to watch those play out.

Adrien portrays Louis Simo, a down-on-his-luck detective who is semi-fictional. I say semi, because I feel he is sort of an amalgam of several people who looked into Reeves’ death. On paper, Simo is an opportunist, kind of a jerk, and we probably shouldn’t like him as much as we do. As with most of Adrien’s characters, however, Simo is multi-layered, and is more human and likable than he would be with another actor in the role.

I really loved the period piece aspect. The “old Hollywood” studio system, glamour, and the not-so-pretty stuff that happened behind the scenes. Adrien does very well in stories set in the past, because he has such a timeless/era-less way about him. That’s actually why he was cast as the lead in The Thin Red Line (yeah, that’s right, he was originally the lead — take that up with director Terrence Malick!).

Most of the performances were quite good, including Ben Affleck as George Reeves (his death comes first, then his life is filled in as flashbacks). I say “including Affleck,” because, to be honest, I was surprised. There are still a few moments of over or under-acting on his part, but overall, he really handles the task.

I also really liked the ending of the film. Which I won’t spoil here, of course.

What I Enjoyed, continued

Some may disagree with this, but I actually loved the “B story” of Simo’s client Mr. Sinclair (Larry Cedar), who was convinced his wife was cheating. Simo continued to take Sinclair’s money, despite not finding any evidence to prove the man’s suspicions correct. This seemed shady and heartless on Simo’s part, as the client clearly had mental health concerns. Ultimately, Simo is shaken by the case, and it really helps his character develop. Simo grows as a person throughout the story, and this side case was a big reason why. That’s why I think the storyline was important. And also, Cedar’s performance was quite good, and really fit the period of the movie.

This video from The Age 30 and Over YouTube Experience gets into what is my favorite aspect of the movie. It’s spoiler-filled, though, just to warn you if you haven’t seen it yet.

I wasn’t really a big fan of Louis Simo’s assistant/lover, Kit Holliday (Caroline Dhavernas). While she did kind of serve as a conscience of sorts for Louis, her presence didn’t seem to impact him or the story all that much. It’s not really the actress’ fault, as I think the problem lies in the writing. She was a “girlfriend character,” which are historically not very fleshed out.

I also wasn’t very fond of Evan Simo (Zach Mills), Louis’ son. He was kind of… creepy, in a Children of the Corn sort of way. I can’t really put my finger on whether it was the character or the actor.

Robin Tunney as Leonore Lemmon, George Reeves’ was she or wasn’t she fiancée. We are meant to dislike the character, I think, but I found the performance itself a bit off-putting, as well. She is another, like Affleck, whom I am on the fence about. I did enjoy her in Encino Man, so I think lighter fare fits her better.

Overall, Hollywoodland is worth a watching, especially if you are a fan of Brody of Affleck. You will enjoy their performances. The story itself is also compelling, with its what-ifs that will keep you theorizing along the way.

A 40-something from Northern California. I love movies. I love writing. So, here we are. View all posts by Patricia Henderson