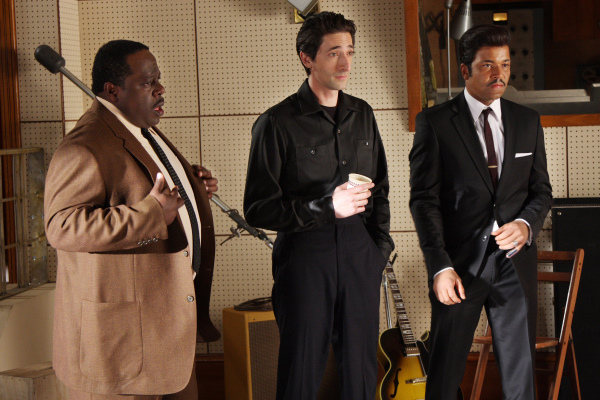 Adrien plays a slightly sanitized version of Leonard Chess, founder of Chess Records, a pioneering blues and rock n’ roll label. Adrien’s version of Len Chess is mainly concerned with getting black artists heard. The real Chess was more concerned with making money, and not giving the artists much of it.

Etta James (portrayed here by Beyonce) also shot down the idea that there was ever any romantic relationship between her and Chess. The movie takes some liberties with that, as well. As I’ve stated before, Hollywood doesn’t seem capable of making a “based on a true story” movie without adding in a romance that never happened. Kind of like Dorotta in The Pianist (she didn’t exist).

The main thing to enjoy about this movie is the music. There are quite a few classic tunes throughout, and the actors do a good job performing them. I also enjoyed the period piece feel: classic cars, fashions of the era, etc.

I also liked that Adrien was playing a character originally from Poland, as he is part Polish himself (along with Hungarian, and Czech), and usually has to play ethnicities other than his own.

Brody plays Chess with a blend of suave, smart, and smart-ass that is very effective. He knows what it takes to make things happen in the music industry, even if the ends don’t quite justify the means.

Paying off disc jockeys to get black artists airplay they wouldn’t get otherwise, though, was actually worth it.

What I Liked, continued

Jeffrey Wright was great as Muddy Waters. Granted, I don’t know much about the real Muddy, but the performance was wonderful, regardless. He captured so much nuance. A figure both inspirational, and at times, not too likable. Kind of like Len Chess, actually. The two were a superb match, and had palpable chemistry. It really felt like a friendship… albeit a shady one, at times.

Wright and Brody will both star in the upcoming Wes Anderson movie, The French Dispatch in July of this year. I hope they will appear together at some point (although, I think the movie will be made up of separate vignettes).

I Was Mos Def Impressed

Mos Def played Chuck Berry like he really was Chuck Berry. I was very impressed by his performance. For someone who predominantly a musician, not an actor, he is surprisingly skilled!

He had his mannerisms, stage presence (and “duck walk”) down perfectly. 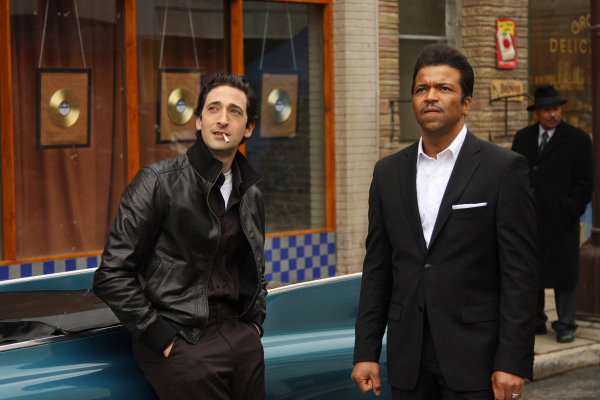 Len and Muddy. Image via IMDb/Sony.

Is it bad to just say… Beyonce Knowles? She sounds nothing like Etta James, nor does she look like her, nor is she a good actress. She was cast simply to draw in an audience of her fans to the cinemas, and to sell copies of the soundtrack. If it weren’t for her, this movie wouldn’t have been as well known. So, I guess it was for the best.

To be fair, though, she was pretty decent in this scene (there’s a spoiler of sorts at the end of this video, just to warn you).

To present a story this important, and leave out, add on, and outright conjure up certain aspects is baffling.

The most glaring omissions are arguably legendary musician Bo Diddley, and Leonard’s brother Phil Chess, who co-owned the label. The latter only appears in one scene, when he brings Etta James to Len in a hotel room, so she can sing for him. It’s a little ridiculous to portray Len as running the whole operation alone, when it was a partnership.

I’m not sure what writer/director Darnell Martin was thinking with some of her choices. It’s almost as if she wanted to work with Beyonce, and just threw a story together with some famous names and songs in it.

One More Gripe Before You Go

Another issue I took, beyond the inaccuracies, is the melodrama. Granted, a lot of not so great things happened to the real musicians depicted in this film. However, some things are presented in an overly dramatic fashion, which brings down the whole tone of the movie.

There’s a dark cloud hanging over what should be, at least in part, a more fun movie watching experience. The lighter moments still feel heavy, and are not allowed to shine. There are even jokes that don’t land, because of the tone the film is taking.

It’s a nice enough movie, if you just want something to watch. If you’re a fan of Brody, Jeffrey Wright, or Mos Def, you’ll appreciate their work here. If you’re a Beyonce fan, you’ll… enjoy her singing. If you love the music of the Chess Records era, that will be a highlight for you.

Otherwise, you may want to sit this one out.