By this DVD’s placement on my shelf, I thought this was where it fell chronologically. Apparently, it actually came out in 2007.  So, I’m a little late, here. My apologies. 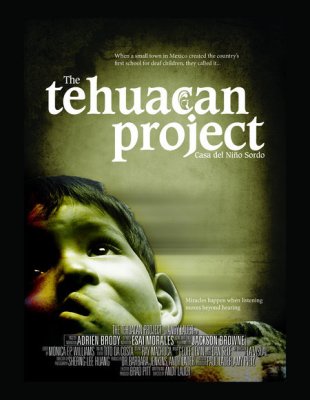 This will be a short review, because it’s a short film.

Casa del Niño Sordo (“Deaf child house”), is a school, and clinic for Deaf children in Tehuacán, Puebla, Mexico. The majority of children there lost their hearing (whether partially, or completely) due to diseases easily prevented by vaccines. Vaccines they weren’t able to get.

The organization known as The Tehuacan Project was formed in order to provide these children with hearing aids, and specialized education to help them adjust afterward. They also offer counseling to parents during the entire process.

Andy Lauer, the filmmaker behind this documentary, had been roommates with both Adrien Brody, and Brad Pitt, at different times in his life. Brad Pitt financed the film, and Adrien narrated it.

Lauer also played softball with Esai Morales, who narrates the Spanish version. And is a neighbor to Jackson Browne, whose song, “Don’t You Want to Be There” is used in the film. Things fell into place just right to make this documentary happen.

As a disabled person (also raising one), who grew up around Deaf people, I may be a little too sensitive on the matter. However, in my opinion, this documentary takes on a tone that is a bit ableist. To be fair, that’s mostly due to what the parents say, not the filmmakers. There is also some problematic wording in the narration, though.

Just an overall tone of “fixing” these children, who are Deaf, not broken. Granted, most of these children went deaf due to illness and injury. So, Deaf cultural wise, it’s not the same as being born that way.

Times change very quickly, and opinions of the past seem insensitive through the lens of the present. I tired to keep that in mind.

There’s a reason Adrien has been called upon to do narration multiple times. His tone here is very soothing, and there is a level of caring that comes across in his inflection. It fits very well.

There really isn’t much else to be said. The trailer below will give you more of a feel for the film, and the project.

A 40-something from Northern California. I love movies. I love writing. So, here we are. View all posts by Patricia Henderson