As some of you know, I write for a movie blog called MovieBabble. I recently did a piece about The Brothers Bloom over there. *Note: that piece contains some minor spoilers, as it’s a retrospective for the 10th anniversary, not a review. If you’d like to read it, you can find it right here. 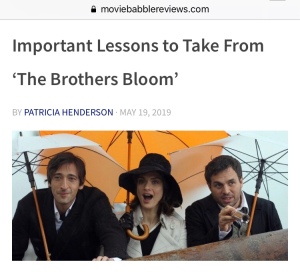 Adrien plays “Bloom” (no first name is ever given), a semi-willing partner in con to his brother, Stephen (Ruffalo). The two have run scams for years, with Bloom usually playing the charming one who approaches the mark. Bloom wonders who he really is, after a lifetime of his brother writing roles for him. And he wants out.