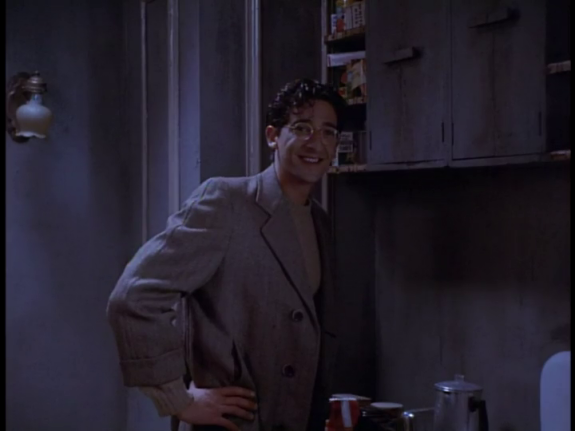 Written by: Stephen Kay, based on a letter by Neal Cassady

*Adrien doesn’t have enough screen time in this one for me to fully analyze the role, but he’s delightful when he does appear.

Neal Cassady (played here by Thomas Jane), was an almost mythical figure among “the beat poets” of the 1950s. Not only was Cassady a writer himself, but he inspired other writers’ characters and stories. For instance, Jack Kerouac’s recurring character Cody Pomeray was based on Cassady, as was Dean Moriarty, main character of Kerouac’s On the Road.

The story we are told in The Last Time I Committed Suicide takes place in the 1940s, when Cassady was in his late teens/early twenties and… sowing his wild oats, I guess you could say. The film’s screenplay is based on a letter Cassady mailed to Kerouac: detailing his girlfriend’s suicide attempt, a failed romance, a tryst with a young girl, and a particularly impressive prowess for stealing automobiles. Jane narrates the film as Cassady, essentially reading the contents of the letter aloud. Narration can be tricky, but it is used well here.

Adrien Brody plays Benjamin (called “Ben” or “Benji”), one of Neal Cassady’s closest friends, with whom he shares custody of a suit. Cassady takes it whenever he wants to look “respectable” (such as job interviews), but it stays with Benji most of the time. Neal tells Benji the suit looks better on him, because he (Benji) is more elegant and has a better frame for it. Benji replies that no one has a better frame for anything than Neal. The relationship between Neal and Benji is very sweet.

It’s made fairly clear to the viewer that Benji is gay. While Neal is not, he is clearly very comfortable engaging in flirty banter with Benji. It’s very nice to see a “straight” man in the 1940s be this secure and progressive (for the time). Then again, it’s pretty clear Neal Cassady was a very progressive sort of person.

Keanu Reeves portrays Harry, a somewhat creepy (by his own admission) friend of Cassady’s. For example: Harry is well into his thirties, but is so enamored with Neal’s sixteen-year-old former lover, that he begs Cassady for his help in bedding her. Now, granted, she was too young for either of them, legally.

Reeves gives a decent performance, though it does have those certain Keanuisms to it. If you’ve seen his other work, you know what I mean by that. My only complaint about Brody’s Benji is that he doesn’t get enough screen time; my complaint about Reeve’s Harry is the opposite. Reeves is overused in this film, in my opinion; however, to be fair, he was the biggest star in the cast at the time.

A side note: one of my very favorite “character actors” is in this film and I was so happy to see her. Cristine Rose plays the mother of “Cherry Mary” (Gretchen Mol), the aforementioned 16-year-old tryst of Cassady’s. She’s so talented and really shines here.

Claire Forlani is also very impressive as Cassady’s troubled girlfriend, Joan. There’s a scene where she is waiting up for Neal that is just heartbreaking to watch. I’ve never seen her in anything else, if memory serves, but she’s wonderful here.