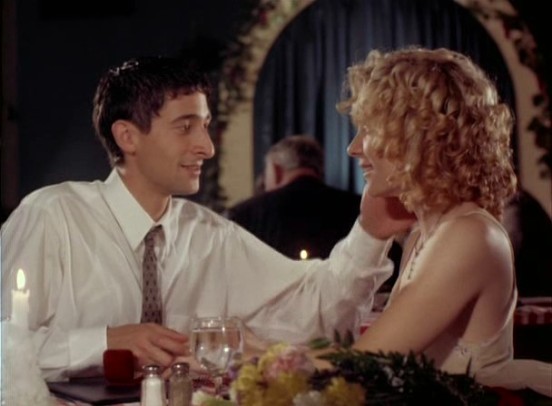 The title alone should tell you this one is a comedy. The Undertaker’s Wedding is definitely just for laughs, there’s nothing overly deep or meaningful going on. If you’ve seen films like Mafia! and Corky Romano, you’ll have some idea of what to expect here. It’s a semi-slapstick comedy about an undertaker named Mario Bellini (Brody) who gets most of his work from mafia killings.

The title leads you to believe a wedding is the focus of the film, and in fact, a proposal happens in the first ten minutes or so to support that expectation. That’s just to throw off the viewer, I think. It’s not really about a wedding. It’s about an increasingly bloody (and increasingly hilarious) mob war and Mario’s reluctant involvement in helping a man (Jeff Wincott) hide out in his funeral parlor, in order to fake his death. When his wife (Kari Wuhrer, displaying her usual porn-level acting range) finds out he’s not really dead, the plan starts to unravel.

Adrien is entertaining in this role and displays once again how good he is at comedy. He really needs more roles like this. If you’ve seen the film Dummy, it’s more of that type of character (though this film is not as good or touching as Dummy). He’s sort of a naive and nervous sort of character, very much under the thumb of the controlling mother who demands he get married. They also play down Adrien’s looks here (“Caesar” haircut, awkward body language), in an effort to make him more “ordinary.” That is a good choice, because I think Adrien in his natural state would be distracting. You forget you’re watching Adrien Brody at times, so it makes it easier to see him as Mario.

We see Mario (Brody) growing increasingly frustrated with having Rocco (Wincot) staying at his funeral parlor (which is also his home). Adrien displays a nice range of emotion and facial expressions, as we’ve come to expect. Mario begins as a sort of… doormat personality, but becomes more bold and blunt as the film goes on. For such a silly film, it actually has pretty good character development.

Go into this expecting to have some laughs, and you won’t be disappointed. Go in expecting some sweeping epic that will change your life, and you will be. 😉

Here’s the trailer, if you’d like to get an idea…

2 thoughts on “The Undertaker’s Wedding”